Home › Fiction › A Bridge Too Far

A Bridge Too Far

John moved silently in the moonless night. Ducking behind hedges and trees along the highway that led to the Land of the Free. He hoped he would be able to cross over.

The Land of the Free. That was what his own country was, many decades ago. But years of political turmoil had divided the nation. Civil war erupted. Conservative and Liberal armies fought each other, in the city streets and the countryside. Laying waste to all they had built together.

John was close. He could see the faint outline of the bridge in the darkness of the night. And hear small arms fire in the distance. How long before he was caught and lined up against a wall for being a deserter?

Throwing caution to the wind, John decided to make a run for it. Freedom was seconds away! He would be welcomed on the other side. The Trudeau Liberation Act ensured safe haven for people crossing over.

He didn’t see the tanks standing guard, blocking the entrance of the bridge, until it was too late. As their turrets swivelled, John hesitated for a brief instant… but there was no turning back. He raced toward them, too close for them to load, heaved himself on top of them and jumped across. He didn’t look back even as he heard a thundering roar that shook the earth.

There was light at the other end. 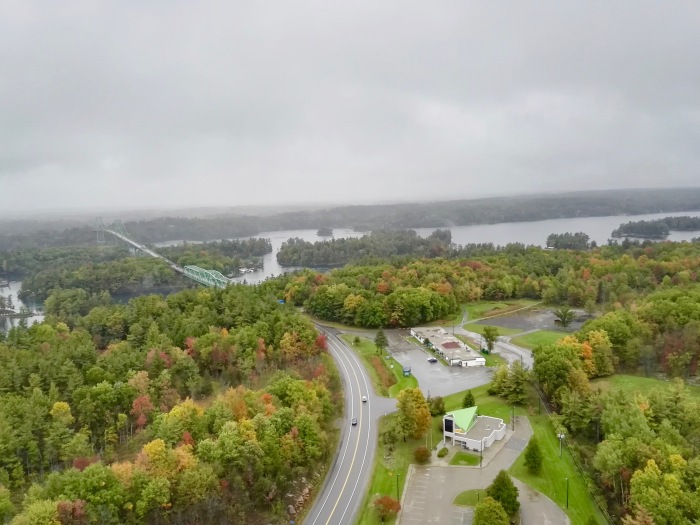 Author’s note: The Thousand Islands Bridge over Saint Lawrence River connects Ontario in Canada to New York in the US. There are more than 1,800 islands in this region, forming an archipelago. This picture was taken with my Huawei Honor

7 phone, from an observation tower in Lansdowne on the Canadian side of the border. Fun fact: It is said that the Thousand Islands salad dressing derives its name from this region!